Launching a new product can be terrifying. There’s so much on the line: years of R&D, potentially millions of dollars, hopes, dreams … futures. If you’re ever going to get it right, this is the time, and you generally only have one shot to hit that mark. It’s a lot like launching a real rocket!*

*(Not really. Launching a real rocket is probably much scarier.

Like firing an actual rocket into the stratosphere, a product launch is a complicated process. And you have to hit your mark if you want to avoid disaster. This is why you should use every advantage at your disposal and make it as easy possible on you and your company. One way to do that is to launch your spiffy new product at a trade show. If the launch platform already exists, why would you build a new one?
REASONS

One of the hardest things to do when marketing any product, let alone a new one, is to entice the media to care. Out in the wild, there’s so much competition for limited media space; often, simply getting an editor of a relevant publication to even see your press release is more a matter of right place/right time than anything else. Obviously, thoughtful strategies, eye-catching information and well-executed tactics enhance the likelihood that your preferred editor opens your announcement at the exact time he or she has column inches (or blog space or social media space) to fill, but it’s a hard audience to pin down.

Luckily, there are trade shows.

At a trade show or convention, the media is there specifically to find things to talk about. Where else are you going to have a captive audience that is willing and hopeful to be captivated? If you can make your splash at a show, the media will fall all over themselves to cover you. Obviously, you need to do your legwork (SEE SIDEBAR). But if you prepare and let the media know that you’ll give them something to talk about, the media will talk about it before, during and after.

Having the media in the palm of your hand is one thing, but there’s a more important audience in attendance at a trade show; your audience. If you’re set up on that floor, there is a zillion-percent chance that the lanyard-wearing, khaki-panted people shuffling past your booth are at least somewhat interested in what you have to say. They’ve paid to get into your trade show, after all. Even if they’re not there to see your booth specifically, attendees are receptive, interested and (ideally) in the mood to love a brand and its products. Worst-case scenario is that they’re interested-adjacent, which is the best case scenario if you’re prepared to dazzle.

This is your audience, and this is your chance to talk directly to them up close and personal. Your audience can experience your product first-hand. Nowhere else can you let an audience see, touch, feel, try, and listen to your pitch without you needing to go to them. It’s a platinum opportunity to pitch your product to thousands of qualified and willing buyers.

A launch turns into an event

Since a trade show is a hyped event itself, it’s not a stretch to say that things that happen within the trade show are also hyped events. Or at least they can be. You’re already going to be at the show; there’s already marketing around the show. Use this as an opportunity to build suspense with attendees prior to event. They’re already pumped for the show. Latch onto their excitement and make them pumped about your show within the show.

As we’ve stated above, a new product launch can be complex and terrifying. A trade show can lessen the risk by acting as a dry run, or soft launch. Launch your product to a smaller, contained audience, get reactions in a controlled setting, make adjustments to your approach and THEN set your little monster loose in the wild with a much greater chance for success. Look at the show as a test-screening for the movie about your trip to the moon.

Trade shows give you the media. They capture your audience for you. They give you a chance to test your plans before going fully public. They let you ride the coattails of a built-in event. But the most important way a show can make your launch a soaring success is through retention. When you’re face-to-face with a willing audience, it’s easier to capture information and generate qualified, personal leads that allow for instant follow-up. Selling is one thing; retention is another. Get their information and give them a reason to keep coming back.

Launching a product at a trade show isn’t the easiest thing in the world. In many cases, the stars have to align for it to even be possible. But if it is possible, you can turn one of the toughest things in the marketing world into a launch that’s out of this world. 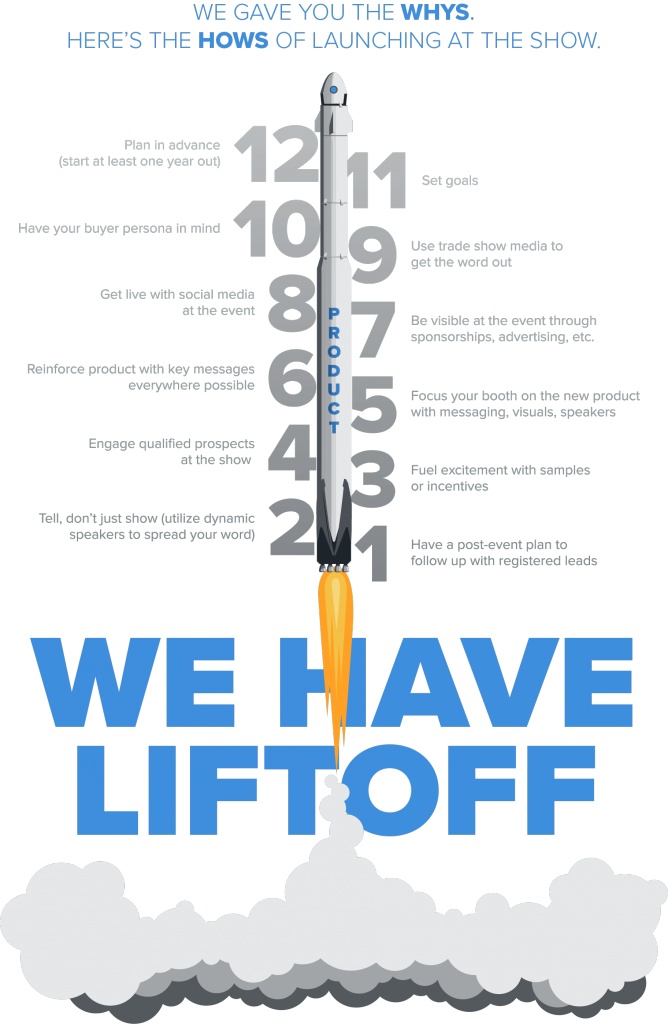