Beyond the Grocery Store

Where does your holiday meal come from?

In the midst of the winter holidays, talk often centers on travel plans. How far do you have to travel? What is your mode of transportation? Turns out that the holiday guest that traveled the furthest may not be one eating dinner but the dinner itself.

With Thanksgiving still on our minds, and potentially as leftovers in our refrigerator, we wanted to look at what that meal may have cost. The American Farm Bureau Federation is a great resource and puts out their annual price survey for Thanksgiving dinner for a family of ten. As the graph below shows, the average cost of the meal has declined steadily and is not at the lowest it has been since 2010. 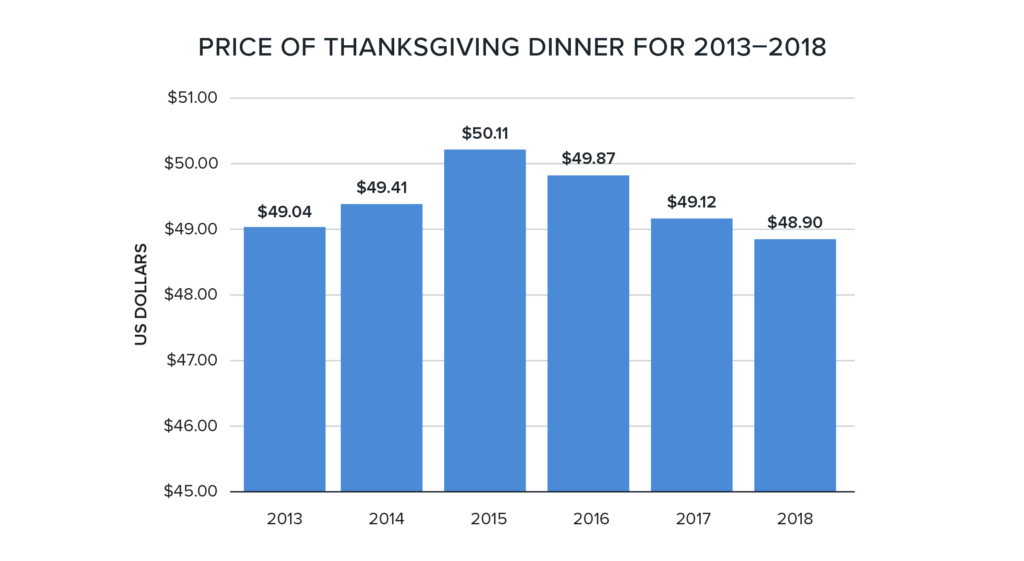 We know how much it costs, and we know where we get the food, but how many miles did each item travel before it hit your grocery store shelves? And how many people interacted with it before it hit your kitchen last week? For the sake of this exercise, we used our Kansas City office as the destination for our holiday feast and assumed that each ingredient came from the state — and county — with the highest production.

According to the USDA, Minnesota produces nearly one in five of America’s farmed turkeys, or roughly 44 million. Of those 44 million, more than 7 million of those birds are raised in Kandiyohi County in central Minnesota. The birds aren’t just raised there; Jennie-O-Turkey Store is the nation’s second-largest turkey processor, owning and operating five plants in Minnesota that employ about 5,400 workers. The state has various other large processing companies that support the volume of turkeys produced there.

The role of flour in your holiday feast can’t be underestimated. From rolls to pie crust to stuffing, flour — and by association wheat — is the foundation of many holiday favorites. While wheat is grown in every state, our neighbor to the west — Kansas — is tops, producing nearly 11 million tons annually. Fun fact: in an average year, Kansas wheat farmers produce enough wheat to make more than 36 billion loaves of bread, or enough to provide each person on earth with six loaves.

For the last 50 years, North Carolina has ruled as the sweet potato capital, averaging approximately 60 percent of the total U.S. supply. In 2016, they harvested nearly 95,000 acres – nearly two-thirds more than the next three producing states combined. If that isn’t impressive enough, three counties account for half of the state’s total production. As sweet potato use continues to rise, we can anticipate seeing them on many a holiday table beyond the traditional marshmallow-topped dish.

One of three fruits native to North America, cranberries are produced almost exclusively in five U.S. states. Wisconsin is the leading producer of cranberries, with more than 250 growers producing 62 percent of the 400 million pounds of cranberries Americans consume on an annual basis. Of that number, 20 percent are consumed during Thanksgiving week. That means that cranberry growers of Wood County deserve a word of thanks for last week’s cranberry sauce.

When you think of Illinois and agriculture, images of miles and miles of corn come to mind. And while you aren’t wrong, you’re missing the fact that more than 90 percent of the nation’s canning pumpkin is grown in the Land of Lincoln. Not only are the growing conditions of Illinois ideal for pumpkin production, but thanks to the establishment of the pumpkin processing industry in the state in the 1920s, Illinois has managed to maintain its pumpkin edge. Today, processing facilities for Nestle Libby’s and Seneca Foods, both located near Peoria, help support the Illinois pumpkin empire.

From an ingredient to the topper on your rolls and pies, no holiday dinner is complete without a contribution from the dairy industry. This utility player is the one to travel the furthest as California is the top state for milk production, accountable for 39.8 billion pounds of milk or 18.5 percent of all milk produced in the U.S. annually. This breaks down to 31.2 percent of the nation’s butter and more than 105 million gallons of ice cream. Those numbers should about cover the holiday season.

Last but certainly not least is the potato. What holiday feast would be complete without the big bowl of mashed potatoes to accompany the roasted bird? Look no further than Idaho to find the leader in potato production, followed closely by Washington. These two states grow more than half of the U.S. potato supply annually. The U.S. is the world’s fifth largest potato producer and in 2017 harvested a total of 1.05 million acres of potatoes.

Keep in mind that this is just where the food is produced and doesn’t account for where it travels between the field and your table. Nor does it consider the veterinarians, ag retailers, crop consultants, input providers, production line workers, truck drivers, warehouse stockers and countless others that play roles in getting the food from the field to your kitchen table.

With all of these miles crossed and supporting parties to consider, $5 per person doesn’t sound unreasonable for your Thanksgiving meal, or any holiday get-together. So this holiday season, and not just Thanksgiving, take a moment to not only thank a farmer but also thank the entire agriculture food chain for the bounty that is possible. 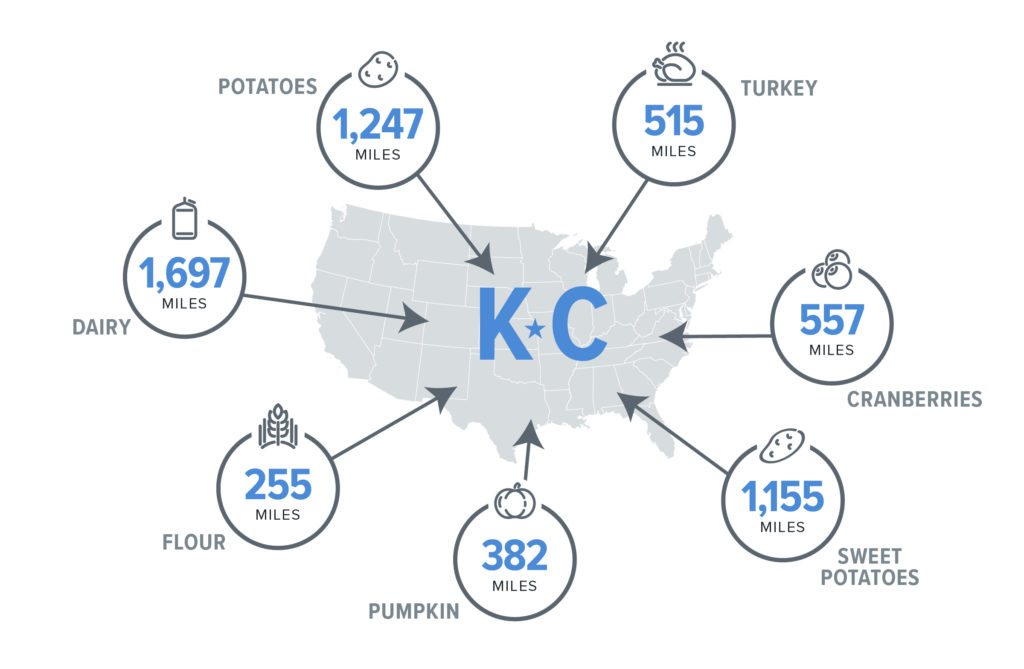